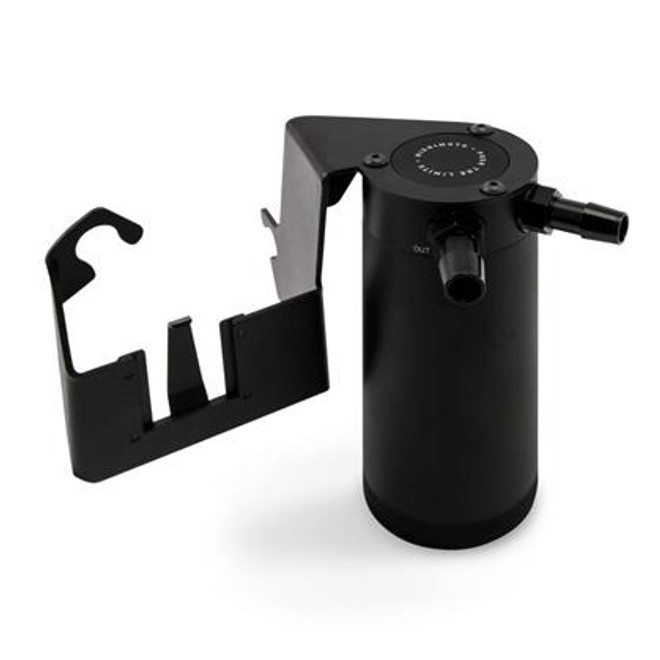 The VQ35DE has long since been the workhorse under the hood of plenty of Nissan and Infiniti products, so give those intake components the protection they deserve with the Mishimoto 2003-2006 Nissan 350Z and 2004-2007 Infiniti G35 Direct Fit Catch Can Kit. These cars were built to be driven to their limits, but the unfortunate side effect of those harsh driving conditions is blow-by., which makes its way back through the intake system, and can build carbon on these components, reducing the power and efficiency of your G or Z. Our complete kit utilizes a single 6061 aluminum tall catch can that mounts in line with the VQ35DE's PCV system using chemical resistant, OEM style flat black hoses and CNC-machined aluminum fittings. Our can is secured with a sturdy, application specific bracket which also doubles as a new mount for your Nissan or Infiniti's power steering reservoir. Where our 350Z and G35 Direct Fit Catch Can Kit adds a layer of stylish protection to your engine bay, it's what's on the inside of the can that counts. Our tried and true internal baffle is specifically designed to aid in the condensation and collection of oil droplets and fuel vapors passing through the PCV system. We've also incorporated internal air diverters to ensure a smooth and constant flow of the PCV pressure through our catch can. As an added line of defense, each one of our catch cans has a 50-micron bronze filter installed to trap any potential rogue oil droplets from escaping into the return line. Each one of our cans are sealed with Viton O-rings to ensure what's collected in our catch can stays in the catch can. Finally, every one of our 2003-2006 Nissan 350Z and 2004-2007 Infiniti G35 Direct Fit Catch Can Kits is shipped with the Mishimoto Lifetime Warranty. Our catch cans are different from most air-oil-separator (AOS) systems on a few levels. First, our catch cans are not heated.

The Mishimoto performance aluminum radiator for the Nissan 350Z is designed and engineered to maximize cooling efficiency by up to 30%, boost engine functions, and most importantly protect your car...

ACT Release Bearing - 03-06 Infiniti G35, 03-06 Nissan 350Z These ACT release bearings are the same high-quality bearings included in your ACT clutch kits. They are available separately for every...