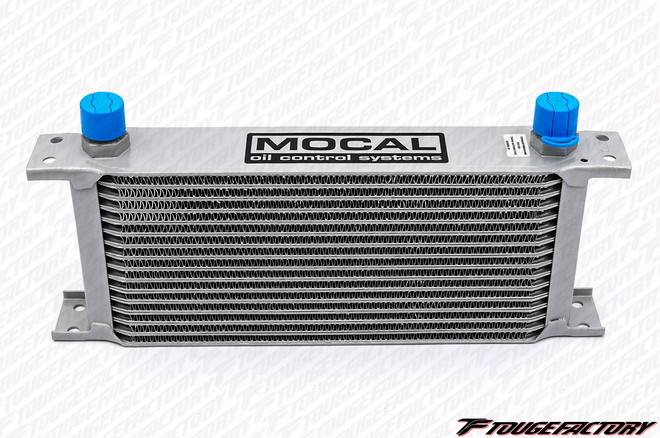 SKU:
16A10
Shipping:
Calculated at Checkout

The most popular oil to air coolers are the pressed plate range, which were first made in the late 50’s. These coolers, built to our specification since 1965 must rate as the single most commonly used component on racing cars world wide.

The cooler consists of a variable number of aluminium pressed plates forming oil ways and end tanks, the oil ways contain turbulators. These do not only break down boundary layer effects in the flow to obtain maximum heat dissipation without undue pressure drop but also, because they are brazed to both surfaces of the plates, hold them together under pressure.
The oil ways are interspersed with aluminium strip louvered and formed into corrugations to provide airways.

The design is beautifully simple and efficient and most suitable for mass production, but it is restricted to a 2” thickness and a limited amount of lengths.
The secret of the success of the Mocal cooler is our insistence on the highest standards of build quality allied to a rigorous inspection system. In particular the attention paid to the accuracy of the pressing tools to ensure the closest contact of the plates during the "Nocoloc" brazing process ensures our superiority over look-a-likes from the Far East.

Maximum working pressure on the standard range of coolers is 10 bar (150psi)although each cooler is tested to 11.5 bar (170psi) this is adequate for all but the most arduous motoring applications, however some customers prefer a higher pressure rating, for instance where the pressure by pass valve does not provide enough protection as in high rpm in cold start up conditions or on dry sump installations.

We have introduced a heavy duty (HD), 12bar (180psi)working pressure, version of the cooler which is dimensionally similar but has aluminium castings between the plates, on the standard cooler this is the weakest point where they are unsupported by fins or tubulators, There is also thicker material in some areas. These coolers are about 18% heavier. Because of their construction they are easier to build in the bigger sizes hence a cheaper price.

Used and Recommended by Touge Factory.We use this core for majority of our SR20DET setups.  Able to keep oil temperatures down with cars producing up to 450whp. For improved cooling we...

Used and Recommended by Touge Factory.We use this core for majority of our SR20DET setups.  Able to keep oil temperatures down with cars producing up to 325whp. For improved cooling we...

Used and trusted by Touge Factory for all of our oil cooler setups. Fluid Capacity:  .25qt Setrab Pro Line Oil Coolers for Racing Setrab ProLine is developed to meet the racing and...