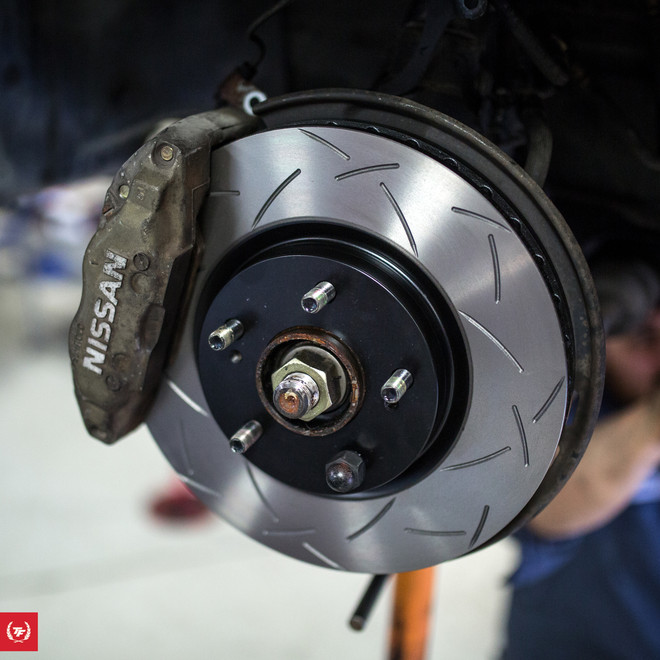 This package aims to increase the braking performance of your R32 GTR in a street friendly application.

The Kangaroo Paw system doesn’t use traditional vanes – it uses a series of diamond shaped pillars to promote greater airflow. The holes now need to be positioned next to these pillars. In a manufacturing sense this is more complex, but from a buyer’s point of view it gives a disc that is stronger as well as better cooled. Each hole is chamfered or ‘radiused’ around its opening to reduce pad abrasion and provide a smooth transition between hole and friction area.

The DS2500  is currently the best hybrid track/street pad on the market.   It features the moderately high bite and solid fade resistance of a track pad, with the relatively low dust and noise levels of a street pad.  When used as a street pad, it can produce some squeal on certain vehicle platforms.  During aggressive driving the DS2500 is known for its flat torque curve, which means as temperatures go up, the response through the brake pedal remains consistent.  If you drive aggressively on the street, do some canyon runs, autoX, and maybe some light track duty on street tires, the DS2500 is tough to beat.

Exhaust systems have always been the base for aftermarket performance. From the beginner starting off to the high horsepower racer, who need to comply to track sound requirements, a well engineered...