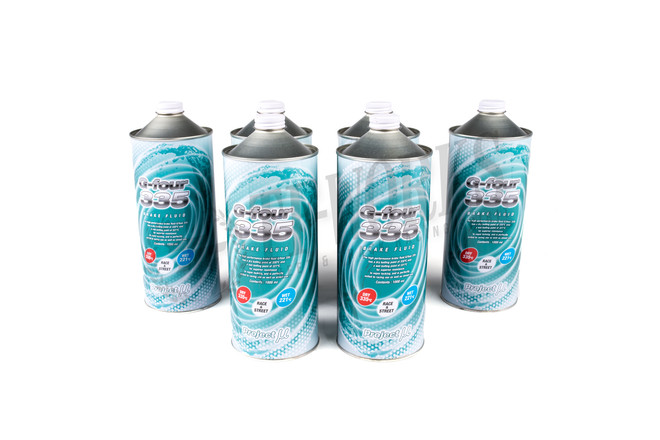 While it would be nice if the fluids in our cars would last the lifetime, the reality is that over time and use those fluids need to be replaced. Many times those most of those fluids will change color from use. However, brake fluid will, in a well maintained system, will stay nearly the same color. Normally, the only time it changes color is when it has been contaminated by an outside fluid. This can make for a very difficult time when your technician recommends to your customer that the brake fluid needs to be changed because of time. Project Mu G-Four 335 Brake Fluid can assist that technician in that maintenance suggestion with its unique feature; changing from green to clear when it’s time to change the brake fluid.

There are two reasons brake fluid must be changed: time and temperature. For the user who drives their car aggressively, it is recommended that the fluid be changed every two years. With hard braking, spirited driving, and high highway speeds, the fluid will tend to reduce its effectiveness within that timeframe. For users that do not drive their car aggressively the maintenance period can be extended, but it is still recommended to check and possibly change the fluid every two years.

The Project Mu G-Four 335 Brake Fluid is capable of withstanding temperatures as high as 335 degrees Celsius (635 degrees Fahrenheit, dry boiling point). However, repetitive high temperatures and vaporization can lead to fluid that isn’t as capable even after bleeding out the trapped vapor. This is, again, where G-Four 335’s unique color and color changing will come in handy for your track day customers.

The color of the Project Mu G-Four 335 Brake Fluid is a two-fold feature; first the green color of the fluid will allow the user to see the vapor bubbles flow out of the caliper bleeder much easier than normal brake fluid. This is not only great for track day customers, but service technicians as well. Second, the color changing feature will allow them to bleed out the exhausted fluid (which is clear) and pull fresher fluid from the brake master cylinder reservoir to the calipers (which will be green). This means that your track day customers will be able to have a safer outing and rest assured that they will know if their fluid will get them home.

Project Mu G-Four 335 Brake Fluid is a 100% Synthetic Glycol fluid that meets and even exceeds DOT-5 requirements. It is not to be mixed with other DOT Brake fluids and a complete flush is recommended prior to use. G-Four 335 is sold in 1 liter cans.

*BREMBO LCF 600 PLUS BRAKE FLUID**Compatability:*Compatible with all Brembo Racing Brake Systems.* Mixes safely with other DOT3, DOT4, and DOT 5.1 fluids* For best performance, LCF 600 Plus should be...

Project Mu Sport Rear Brake Shoes for Nissan 350Z Z33  Superior bite and control make the SPORTS REAR SHOE the ideal model for everything from on-street driving to circuit racing.If you have...