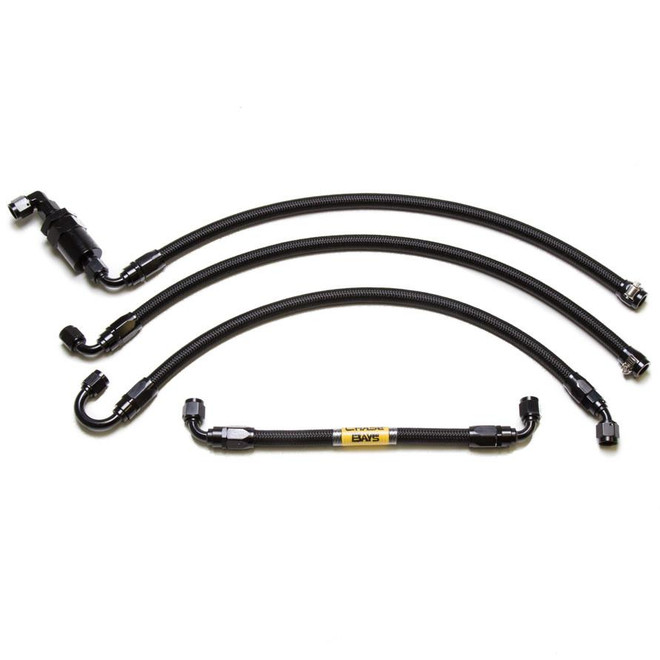 This product is designed for enthusiasts who need to modify the engine bay fuel system in order to compensate for the GM LS | Vortec V8 engine swap, those who want to clean up their engine bay with quality stealth design and components, and to adapt an aftermarket fuel rail or fuel pressure regulator seamlessly. If assembled incorrectly the fuel lines can cause leaks, which can easily catch your car on fire and/or lead to engine failure. With our kit we use the best fittings in the industry and pressure test every line we assemble. If this product is installed correctly, we guarantee a leak free start up.

AFTERMARKET FPR IS REQUIRED WITH OUR KIT

This kit includes (4) black -6AN nylon sheathing/SS reinforced hoses and a black anodized fuel filter. Everything needed for the changeover. The FPR mounts on the driver side shock tower. It is a pre-fuel rail designed fuel pressure regulator setup. Most kits have the FPR after the fuel rail, which makes for 1 extra fuel line and more engine bay clutter. This requires you to plug/block off one side of the fuel rail.

• FPR to Fuel Rail – This line threads onto the FPR then to the supplied fuel rail adapter fitting on the fuel rail.

• FPR to Return – The fuel return line attaches to the bottom of the FPR then routes down to the OEM return hard line.

• Rail 2 to Rail 1 - This line bridges each bank together so both fuel rails get fuel. Our sleek design keeps this line on the back of the intake manifold to eliminate the clutter on the front.