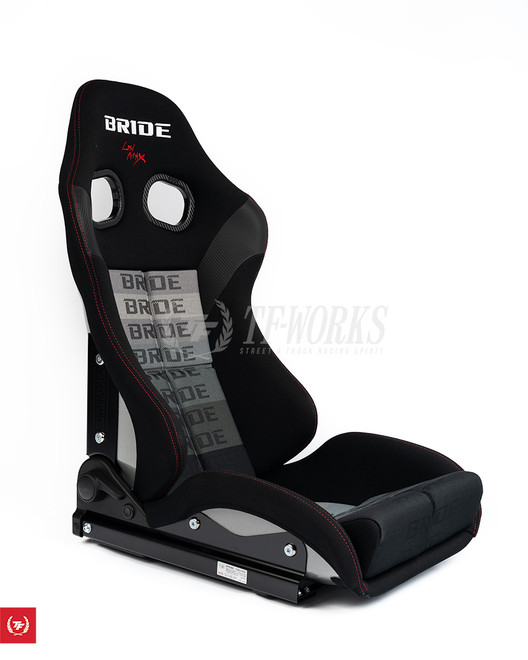 The STRADIA series, which has undergone its first full model change in about 15 years, is a new generation of reclining seat created with BRIDE's original idea in mind: to combine the hold performance required for circuit driving with the convenience and comfort for daily use. From the design, body shell and frame to the cushion, and reclining mechanism, BRIDE is a newly designed flagship model created with 40 years of cultivated experience and technology in the motor sports scene.

The innovative bone frame and body shell with a monocoque structure that inherits the design of ZETA IV are shaped to envelop the shoulders with more emphasis on hold performance. As a result, the load capacity of the frame has increased by 200%, the torsional strength by 40%, and the frontal collision strength of the backrest by 15% compared to STRADIA II.

The reclining mechanism has been renewed to achieve a compact design while allowing significantly improvements in precision and strength. In addition, backlash (play) and looseness, often found in stepped adjustment mechanisms, have been reduced to the utmost, achieving more reliable hold and comfort.

In the previous model, the backrest angle adjustment came in dial form, but in STRADIA III, a one-touch reclining lever has been adopted for operability, convenience, durability and saving on in-vehicle space.

Because STRADIA series utilizes BRIDE's patented LOWMAX System technology, it enables a low position even in a tight seat space. Even if offsets between the steering and seat centers occur, with the LOWMAX System it is possible to set the offset to zero*. (In some cases, certain models may not reach zero)

Bride Xero CS - Gradation / FRPA full bucket seat for a next generation, combining high functionality, comfort, and safetyEquipped with a medium sized head guard, the XERO CS is the perfect model for...

Bride Xero RS - Gradation / FRPA full bucket seat for a next generation, combining high functionality, comfort, and safetyIn the unlikely event of an accident or collision, the XERO RS is equipped...

The all new ZETA IV is one of Bride's flagship FIA APPROVED full bucket racing seats. The sides of the seat feature leather padding for extra grip. ZETA IV uses the latest technology for extreme...

A newly designed, next generation seat The XERO Series is a full bucket seat that was borne from BRIDE's over 30 years of research and development of racing car seats. With detailed care into...

ZIEG IV WIDE is the wide model of ZIEG IV which is a full bucket seat that has been elaborated to pursue the high safety and the hold performance based on various racing experiences and feedback from...