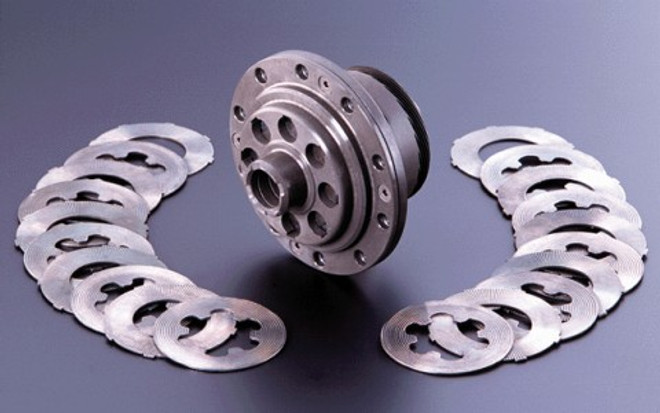 LSD is an acronym for Limited Slip Differential. It is a gear mechanism which limits the rotational difference of the out-put shafts.

An “Open Differential” (as compared with LSD) allows the transfers of power to the wheel/s which are experiencing the least amount of resistance. This enables a car’s wheels with the least resistance to run at different speeds in a turn. As an example, when cornering, the inner wheel travels a shorter distance than the outer wheel. With an “Open Differential” you will experience easier handling during a turn. However, an “Open Differential” may not necessarily produce the best results for Racing, Drifting, and other Performance Driving.

Why does LSD improve your driving performance?

When cornering in competition or a racing situation, you will frequently experience body roll where one wheel of the car is lifted from the ground. This will cause the “Open Differential” to transfer all the torque to the wheel lifted rather than to the wheel that is on the ground. The results are a useless “wheel spin” where as the car loses its forward momentum. In order to eliminate the “spin”, your LSD will transfer the torque to both wheels which consequently improve your lapping time.

The benefit of a performance LSD is quite obvious in the autocross or in a road race with many tight corners, but the benefit is not limited to those situations.

In Drifting, an “Open Differential” makes it very difficult to control vehicle’s slide with throttle actuation. LSD will allow the driver to steer the car with the throttle, allowing larger, more dramatic slide with plenty of forward movement.

In Drag Racing, the impact of an LSD is less dramatic. However, during sudden high-power starts and while up-shifting during acceleration, it is possible that either the left or the right tire can frequently slip. A performance LSD will quickly detect that condition and lock the differential so that you do not lose any time. Not even a few tenths of a second is wasted!

There are several types of LSDs.

Viscous type
By utilizing the torque generated from your oil viscosity, a “Viscous Type” LSD activates through viscous coupling that are sensitive to the rotational differences. Example – the Nissan 350Z is quipped with a Viscous Type LSD.

Helical type
A Helical Type LSD has internal helical gears which produces friction resistance and activates itself depending on the input torque value. The maintenance is almost free for the life of the car. Example – stock LSD for Honda S2000.

Torque sensitive type
Similar to a Helical Type LSD, a Torque Sensitive LSD uses friction resistance from the internal gears. The effectiveness varies depending on the torque input. Generally a Torque Sensitive LSD requires a large amount of torque input whereas a small value of torque does not have much impact on the LSD’s activation. Example – stock LSD for Mazda RX8.

Above mentioned LSDs are frequently chosen by many car manufacturers due to the advantage on easy maintenance and very little noise levels. However, when it comes down to the high-performance driving, professional drivers will always choose a Clutch Type (also called as a mechanical type).

In general, a Clutch Type LSD has pressure rings and friction plates inside the differential case. The LSD acts like as a standard differential when a car is moving straight or the rotational difference between left and right wheels are similar. Once there is a rotational difference among wheels, the cross axis which is set in the middle will press the pressure rings, then the pressure rings will transfer the movement to the clutch plates. When all the clutch plates are engaged, both wheels are locked and the torque is transferred equally to both wheels.

Is a clutch type LSD noisy??

The concept that a clutch type LSD chatters and very noisy is out of date. ATS carbon LSD surprised many people with that quietness and effectiveness. This year (2009), ATS introduced super silent LSD which is a metal LSD but it does not chatter.

As in a performance clutch, the diameter of and the number of the disc inside the LSD case determine the absolute torque delivery capacity. The bigger the disc and the more discs are used internally, the larger the absolute locking power becomes.

By rearranging the internal discs, it is possible to reduce the maximum locking capacity of an LSD. For example, in the case of standard ATS metal LSD with 16 discs, the internal discs are arranged by A-B-A-B-A-B-A-B-Cam Ring-B-A-B-A-B-A-B-A. (where A is a disc with outside edge and B is a disc with inside edge). If you change the order to A-A-B-B-A-B-A-B-Cam Ring-B-A-B-A-B-B-A-A, the effective disc number have been changed from 16 to 12, which is a 25 % reduction. Consequently, the maximum locking capacity is reduced by 25 %.

LSD - mechanism, function, & benefit LSD and open differential LSD is an acronym for Limited Slip Differential. It is a gear mechanism which limits the rotational difference of the...

Complete rebuild kit for the ATS Hybrid Carbon LSD.**You must specify which LSD you have and car make and model**Please allow 2 weeks for delivery from Japan.

If you need a different cam profile for your ATS LSD, Please give us a call, or note what cam profile you are looking for.Each application varies, and offers a more aggressive or less aggressive cam...

ATS Limited Slip Differential Fluid.The performance of LSD varies greatly depending on the oil used.Inappropriate oils may cause abnormal operation during break-in and shakedown, and may cause...