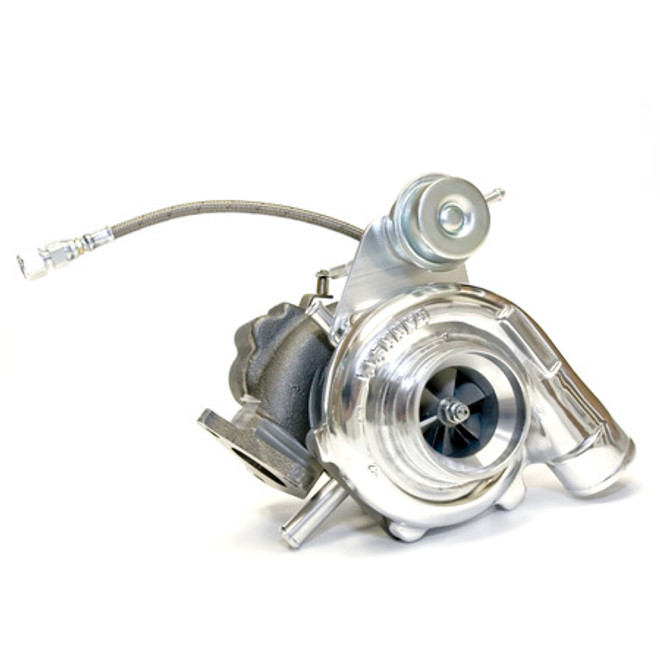 The Garrett GT Ball Bearing GT3076R, the benchmark 500+ HP capable dual ball bearing turbo, is now available in a drop-in package for the Subaru WRX/STI! The easy to implement turbo assembly that takes no more than 1-2 hours to install in place of the stock journal bearing VFXX unit is made possible by a high flowing GT inspired ATP exhaust housing and a series of custom engineered components built to suit the installation.

Each GT drop-in turbo package consists of a Garrett factory assembled and high speed balanced dual ball bearing CHRA which is then assembled into a set of CNC machine ported housings that have been optimized in every aspect for maximum flow and efficiency.

All accompanying oil and coolant supply components included in each kit have been designed to properly and seamlessly bridge the Garrett GT turbo to the EJ engine so that the fit is as OE as possible.

Just bolt the turbo on, add fueling and a good tune and prepare for a blast of acceleration. Garrett GT turbos offer more then just "peak HP" numbers. These GT turbos off more torque area under the curve and more "accessible" power then any other turbos series out there.

We do recommend that you compliment your GT bolt-on turbo with a nice high flowing bellmouth downpipe and a high flowing inlet pipe to effortless channel air in and out of the turbo. Although every bolt-on GT turbo ships with a 3" inlet, we do provide a "stepdown" sleeve just in case you're forced to use the stock 2.25" inlet hose. However, as a rule of thumb, turbos, especially higher flowing units love as much inlet flow as possible. This promotes both quicker spoolup and better ultimate HP, with less boost pressure at the manifold. The 3" downpipe and bigger inlet is critical for reaching peak efficiency on the GT turbo. Please also be aware that some downpipes such as the stock catted downpipe, has a "no-flow" door at the wastegate flapper area. This type of downpipe may not allow the wider swinging wastegate valve to open all the way, thus causing the possibility of a "boost-creep" condition or uncontrollable rise in boost.

The GT3076R is a great match for the 2.5L that still has great spoolup, especially if you're looking for boost threshold that is just a little later than stock but still want enough airflow for 500+HP. The GT3076R makes boost about 300 to 400 rpms later than the GT3071R but keeps pumping where the GT3071R starts to run out after 450HP. A lot of the boost is available even at part to medium throttle. Dual ball bearings means boost recovery between gearshifts is awesome with full boost ready even before upshift is complete as the STI lurches forward with shear enthusiasm at the onse of each gear. The 2.0L driver should not rule out the use of the GT3076R if his HP target is in the same range. This competition grade turbo is still a big favorite for the HP range because it hits like a hammer while other 500HP turbos are still "spooling up".

ATP's GT2871R can handle around 400 horsepower. This is a good turbo for built-engine 2.0L WRXs that don't mind adding some lag for some more top-end performance. This turbo is still pretty small for...

The Garrett GT Ball Bearing GT3071R, quite possibly the fastest spooling and most responsive 450+HP capable turbo on the planet now available in a drop-in package for the Subaru WRX/STI! The easy to...

This is a direct bolt-on kit for the WRX and STI.The next step in the evolution of the turbocharger is here! Garrett® GTX-R Turbos feature all new compressor wheels with next generation...

The Garrett GT Ball Bearing GT3076R, the benchmark 500+ HP capable dual ball bearing turbo, is now available in a drop-in package for the Subaru WRX/STI! The easy to implement turbo assembly that...