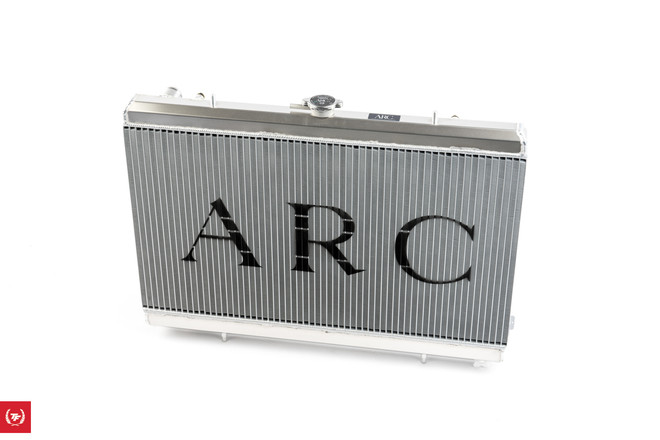 Availability:
Made To Order
Shipping:
Calculated at Checkout

For the inner tube, use a micro tube molded by a special manufacturing method. We secured the required strength and weight reduction. For the outer fin, the surface area is expanded by the slit structure, and stable cooling performance supported by many races has been realized.

The super micro tube (inner tube) realizes excellent pressure resistance and durability because it has several layers of tubes inside the tube.
In addition, all steps in-house production allows the outer fin to achieve optimum fin pitch according to specifications. Its performance is also proven in the world's top race.

Pursuit of heat exchangability that corresponds to engine that improves performance.

Development of heat exchange equipment suitable for high performance of engine performance. ARC has realized a 27.5% higher efficiency than conventional radiators, thanks to a new manufacturing method based on state-of-the-art super microtubes. As a result, it is effective not only for the race but also for the heat exchange performance in the street. It enables stable conditions on the engine.

Depending on the specification, set the necessary series for the engine. Water temperature stability and management realized.

The Mishimoto performance aluminum radiator for the Nissan Skyline is designed and engineered to maximize cooling efficiency by up to 30%, boost engine functions, and most importantly protect your...

Koyo R-Core Radiators feature a 53mm (2 1/16") thick aluminum core. Koyo radiators are made with very high quality control and state of the art brazing furnace to ensure there are no leaks...

LeaskSpec aluminum cooling panel for the R32 GTR.Cooling panel is a simple bolt-on piece that will aid with directing air to the radiator rather then going over it.Also makes for a nice ornament,...